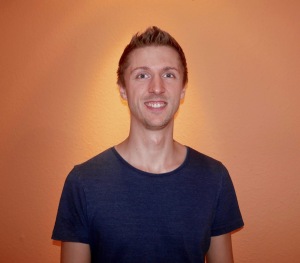 Dancing for me in three words: Freedom, Fun, Happiness
Daniel Barreau started to dance at the age of 15 with ballroom and latin dances. He discovered Swing in 2013 at a little pub in Saarbrücken and got hooked from the first time seeing it. He went to as many classes and social dances as possible and still couldn’t get enough. Since he started to dance, the dancefloor got his second home. End of 2015, he moved to Essen. Since then, he’s been dancing between 5-7 time/week and is travelling a lot. He started to teach at LindyPott in 2016 and this allowed him to improve his skills even more. He loves teaching and sharing the lindy spirit. What thrills him most is seeing people make progress in his class. He loves to play with the music and to surprise followers with funny and fancy moves. For him, the most important thing is having fun with his dance partners and seeing them laughing.

Amelie started dancing ballroom in 2005 in Witten, but when she discovered the Lindy Hop in 2007 in Dortmund it immediately became her all-time favourite dance. After moving to Nijmegen in 2012 Amelie was euphoric when she discovered that there was a group of Lindy Hop about to start in her new home town in 2013. Amelie joined Lindy What and started teaching there in 2014, which she continued to do until 2017. After finishing her studies in Nijmegen she moved back to Germany in 2017, where she started teaching Lindy Hop classes in Witten together with Daniel and re-joined Lindy Pott in Dortmund.
Amelie loves a good social dance! Infecting people with the joy that she gets from Lindy Hop makes her smile every time she does so. To her this wonderful dance is the language of happiness!